To (mis)quote Roy Scheider's character, Brody, in Jaws, "You're gonna need a bigger cart."  With over 20 miles of irrigation pipe buried beneath the surface of the golf course, it takes a lot of air to remove the water and prevent potential damage due to freezing during the winter months. 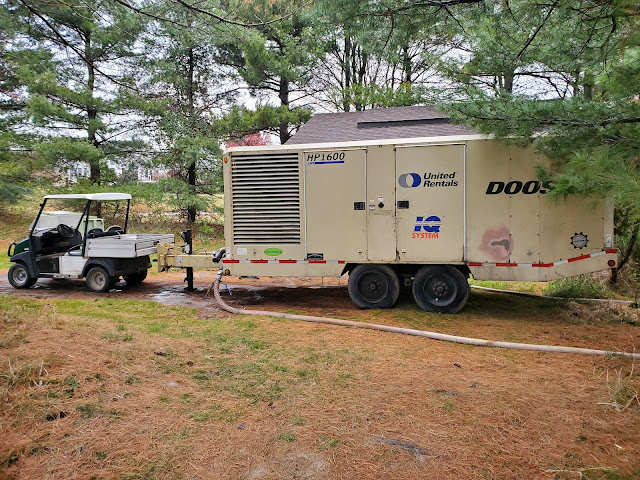 Still, this gargantuan compressor was a little larger than we typically receive-- as you can see, it blocks the entire pump station behind it.  Fortunately, despite its size, it performed like a gentle giant.  One of the keys to a smooth system blow-out, is the pressure regulating valve we connect between the compressor's discharge hose and the irrigation system. 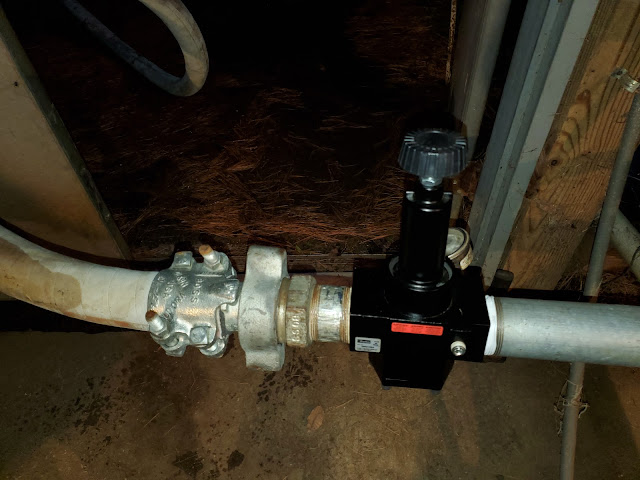 With the system now winterized, we will be hoping for some occasional precipitation to allow our seeded and sodded areas to progress during the winter months.

Last week we mentioned using Poa annua seed for the Clubhouse putting green, in order to best match the greens on the golf course.  While many of the top courses in the country have greens that are predominantly Poa, overall, this grass still has a bad rap.  It's known for producing vast amounts of seed in the spring, leading to a bumpy putting surface, having a shallow root system requiring frequent watering, and is prone to damage from diseases such as Anthracnose.

Given all of these weaknesses, why would anyone want to use Poa?  Well, it may be time to rethink our views on Poa and all of these negative attributes which have long been associated with it.  Dr. David Huff of Penn State has spent close to three decades selecting and breeding Poa.  What he has developed is definitely not the weak, vulnerable grass we're used to.  For example, to see Poa outperform Bentgrass in drought recovery is pretty amazing: 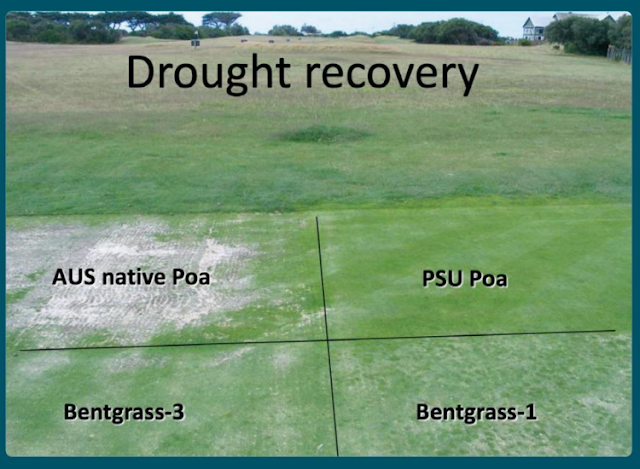 Similarly, disease resistance in this Poa is noteworthy:

Again, the Clubhouse green has been seeded with both Dr. Huff's Poa, as well as one of the best performing new Bentgrass varieties.  Although we seeded quite late, a quick peak under the cover this past week, has things looking promising. 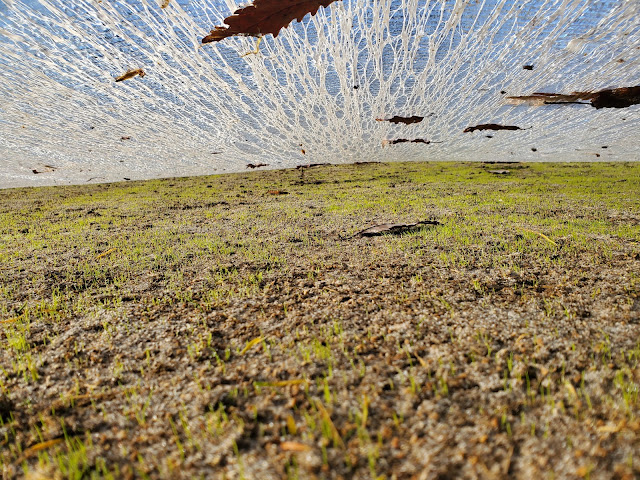 Posted by John Slade at 6:28 AM No comments:

If you haven't had the opportunity to take in the new putting green at #1 tee, you're missing something big.  In fact, the new green is more than twice the size of its predecessor. 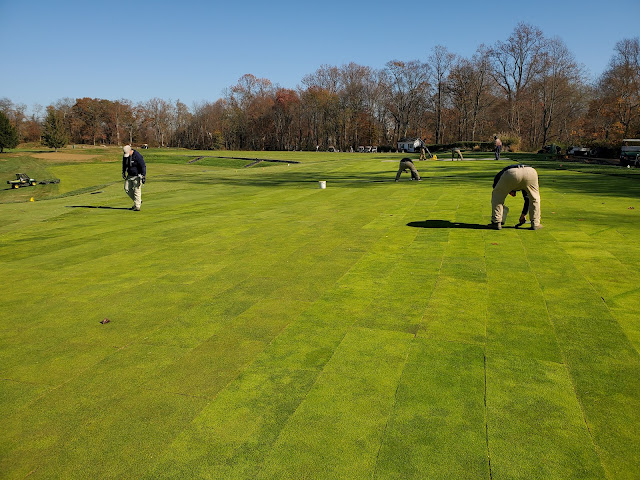 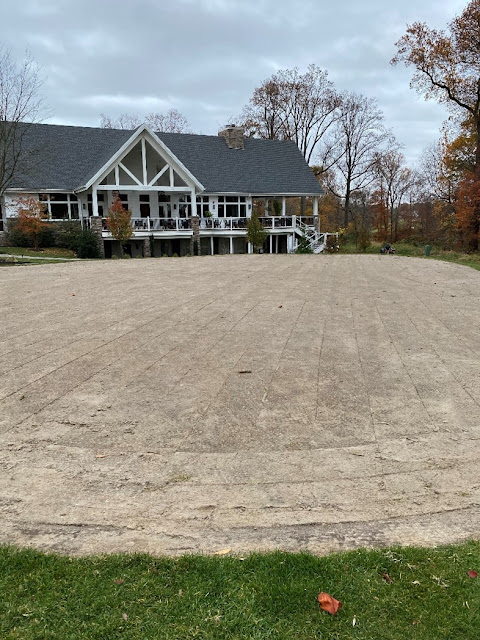 It would have been difficult to find replacement sod for the Clubhouse green from a commercial source which closely matched the mix of Bent and Poa on the golf course greens.  We were extremely fortunate to be one of  only a handful of golf courses in the country to receive Poa seed developed by Dr. David Huff of Penn State University.  Using his suggested ratio of Creeping Bentgrass and Poa annua, the Clubhouse putting green was prepped and reseeded last Monday. 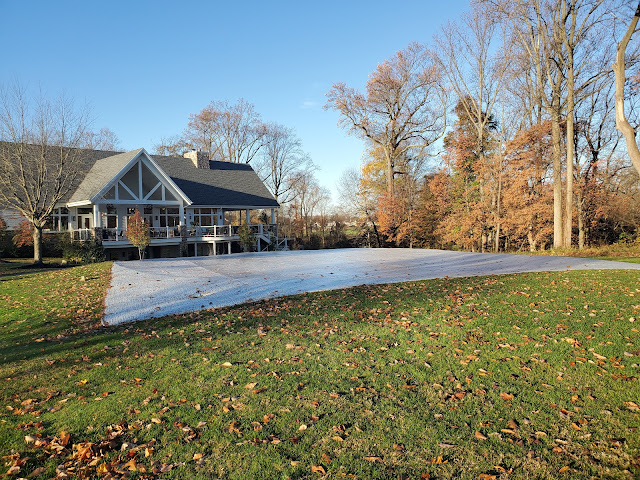 Seeding in November in our region can be a roll of the dice, so a turf cover was installed over the green immediately to help promote seed germination by retaining moisture and increasing the soil temperature.  The next several months will involve a good deal of cover on/cover off, on all of the recently renovated fine turf areas around the course.

Posted by John Slade at 6:30 AM No comments:

Congratulations are in order!

Recently, one of our longtime employees, Jacques St. Elien, officially became a citizen of the United States.  Jacques and his family emigrated from Haiti in the 1980s. 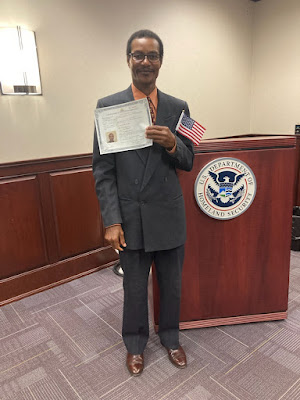 Jacques and four of his brothers were employed by the general contractor who built Laurel Creek, so he took part in the original construction, beginning in 1989.  If you happen to see Jacques on the course please give him a thumbs-up for this wonderful accomplishment.

Posted by John Slade at 5:27 AM No comments:

In a holding pattern

The old putting green sod was stripped over two weeks ago, on October 15.  Since then you may have seen the sod comfortably resting to the left of #9. 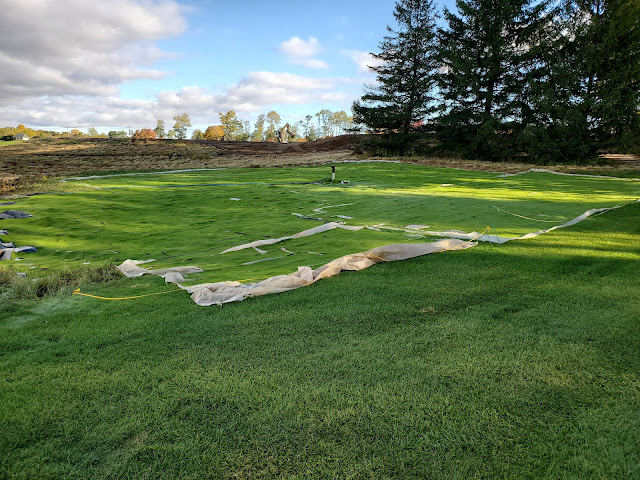 Prior to cutting the sod, fungicides and a plant growth regulator were applied to the green.  While there hasn't been a whole lot of foliar growth since then, it's great to see long white roots emerging from the bottom side of the sod. 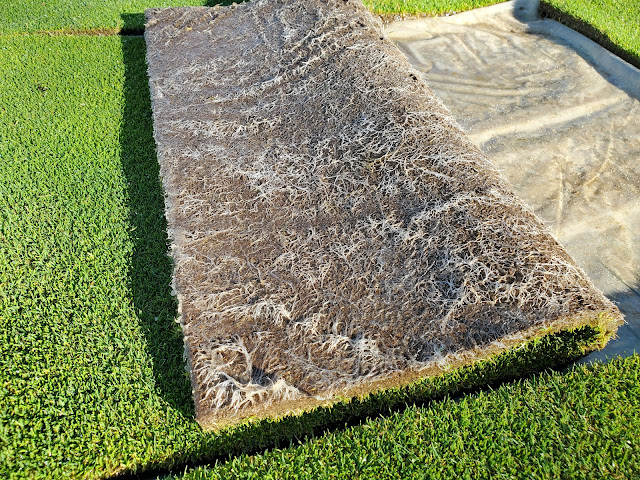 As with many things these days, some supply issues have slowed down the project a bit, but with any luck, the sod will be moved to its new home later this week.

Posted by John Slade at 5:18 AM No comments:

Don't let the grass grow under your feet

While golf course architect, Andrew Green, is all about growing grass, the in demand man has no time to waste.  Arriving pre-dawn on Friday morning, a lack of light didn't slow Andrew down, as he went to work checking grades on the new putting green. 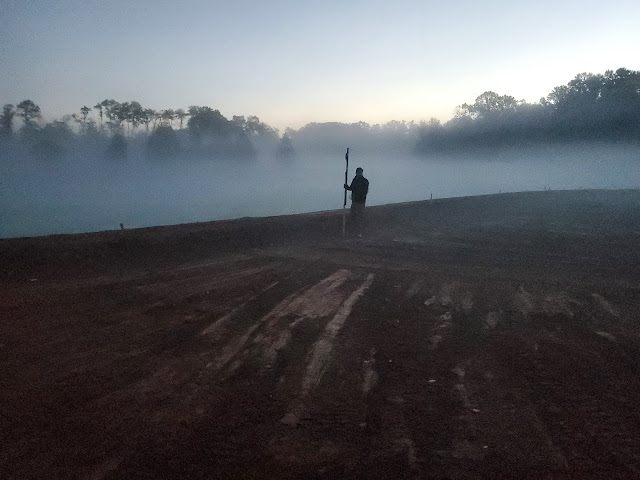 With sunrise, it was time for him to move some dirt, making a few minor adjustments, prior to the drainage being installed. 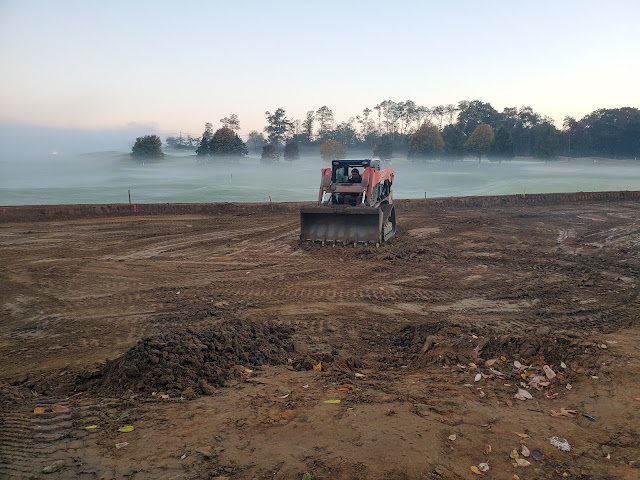 Finally, with a bit more daylight, Andrew discussed the details with the construction team.  The new green is twice the size of its predecessor, and will tie-in nicely with the tees on #1. 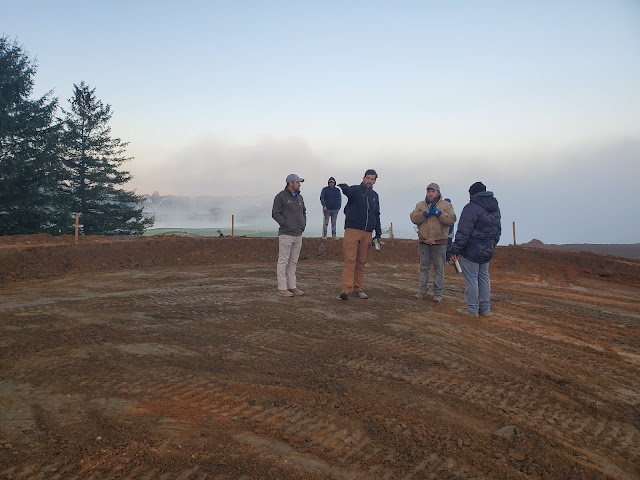 Posted by John Slade at 6:31 AM No comments:

As the bunker phase of this year's Master Plan work is wrapping up, it's time to move on to bigger and better things.  Construction on the new practice green and redesigned #1 tee is now underway.  This area is quickly becoming unrecognizable from what it was a week ago. 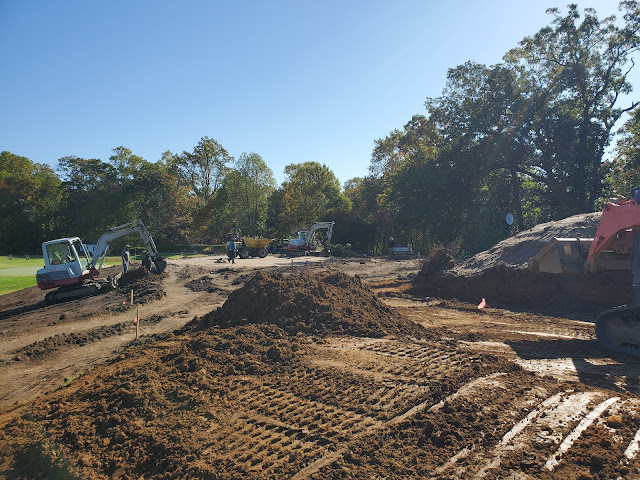 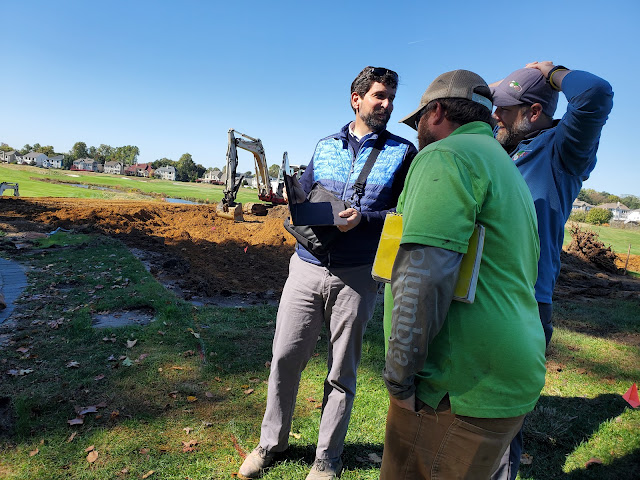 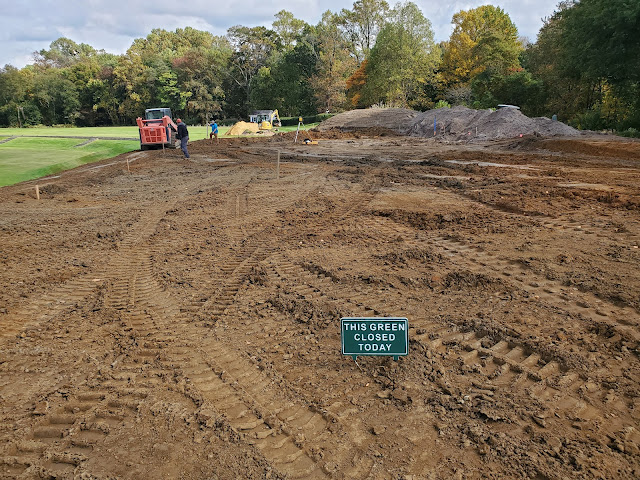 One of the trickiest parts of this operation is saving the sod from the old green.  On Saturday it was stripped, then relocated to the left of #9 where it will be stored until the new green is complete.  At that time the old sod, along with material from other areas will be placed on the new putting green.  Similar to the short game area last year, once completed we will be covering the new putting green over the winter months.

Posted by John Slade at 5:58 AM No comments: